In my previous post I have mentioned eight factors to consider when setting an admission price. I just want to explore the first factor that is the factor ‘art matters’. What does ‘art matters’ mean? I will present a few cases to show why ‘art matters’ in setting your entrance fee and I will show some nice homemade charts.

The first case I present is the exhibition called ‘King Tut‘. I have visited this exhibition in Chicago. I have visited Egypt two times and you could say I really love that ancient stuff, and my wife loves it even more. So when we were on a holiday trip in Chicago we stumbled upon the Tut exhibition and immediately we wanted to go. The image of the sarcophagus was all over the place. We already imagined seeing the golden case where the young king was laid to rest in. The exhibition was in the Field museum. While moving to cashiers desk we saw the ticket price (I don’t know the admission fee anymore but I can recall that it was huge, I looked up the fee for the Dallas exhibition and it is $37 dollars and $7 dollars for the audio tour). We started to discuss if it would be worth the fee. My wife said this would be a once in a life time experience…and when you are on a holiday those extra dollars doesn’t really matter anymore. So we bought the tickets and we were assigned to the 11.30am group. The excitement was building up. We were anxiously waiting in front of the exhibition door to be let in. The doors went open we went into a dark room where a story was told (the contents of the story did not make any impression). And then we were let loose. My wife and I said to each other that we would skip all the other artefacts and would head on to the big golden sarcophagus first. So we rushed by moving from room to room in a very fast pace. And then we were at the end of exhibition….. and wondered where that big golden case was, the masterpiece. Where was King Tut?

Well we actually missed it. The golden case we were looking for was a golden statuette of about 20cm’s (8inches). It was so small that we just looked over it. They even made a separate room for that small golden statuette but we had something completely different on our minds. You can imagine we really thought we were ripped of big time. Our expectation was not met at all. What is the point I try to make here? The point is that if the exhibition would have met our expectations we thought it was ok to pay the $37 dollars per person. We really love Egyptian artefacts so much, that we would pay that amount to see the big celebrity king Tut.

Another example is the (in)famous ‘Bodies, the exhibition’. This one I did not visit but not because of any ethical reasons. I just thought it was to expensive. I think it was about 20 euro’s when the exhibition was in Amsterdam. While on average visiting a museum in Amsterdam costs about 8 euro’s so there is a premium of 150%.

The last example I want to share is the exhibition ‘rembrandt caravaggio’ in the van Gogh Museum in Amsterdam. The normal entrance fee to the van Gogh is 10 euro’s you had to pay 10 euro’s extra to visit the exhibition. Also a premium of 100% on the normal entrance fee. But you can ask, where those exhibitions a success? I know ‘rembrandt caravaggio’ was and seeing the queues in Chicago I presume King Tut is also a success. For Bodies the exhibition I don’t know if it was a success. It got lots of publicity so maybe it was too.

Chart explanation: I have made two charts, one with only the small museums and one with all the museums. I made the chart with only the small museums because they are more comparable. There are only a few big museums in Amsterdam and as you can see in the second chart they change the perspective a bit. The green line is the correlation. I can state there is a medium correlation between attendance and admission price. 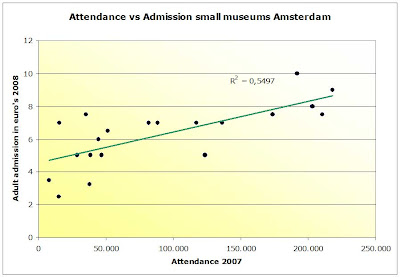 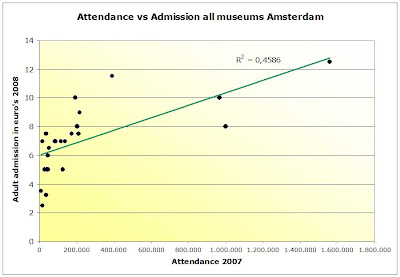