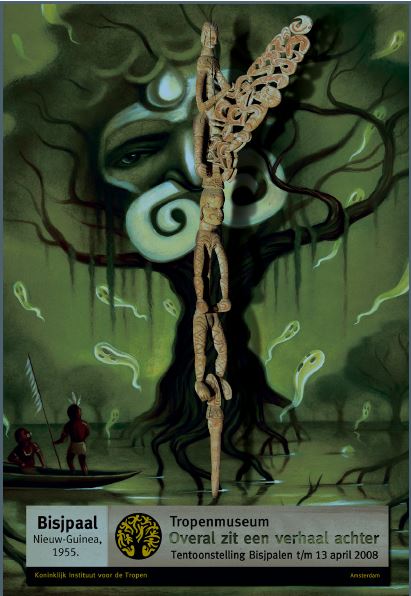 “In the past I have made too many compromises when I made advertisements for the Tropenmuseum”. This is what I was thinking when reading the book “Ogilvy on Advertising

“. This book is from 1983 is written by David Ogilvy an advertising guru from the past. For me this book has one main message:

While it seems very logical that “advertising is selling”, I was a bit shocked when I comprehended the main theme of this book. In the past years that I have worked at the Tropenmuseum I have seemed to forget that we made advertisements to sell products. For me it seems that I made too much comprises in the past because of esthetical en curatorial objections. Let me explain with two examples. First of all The Tropenmuseum made a campaign with advertising agency Saatchi & Saatchi in 2007. The purpose of this campaign was to change the image of the Tropenmuseum and to promote a new exhibition called Bisjpoles. The main theme of the campaign was “There is a story behind everything” and the posters made, expressed that slogan literally. Below you see the Bisjpole example, where in front there is a picture of a Bisjpole and behind illustrated is the story of the Bisjpole. In my opinion it is very beautifully crafted by Saatchi & Saatchi en has a very big esthetical appeal. But did it sell?….No it did not.

The exhibition was highly rated in the press but it just did not seem to get a high attendance. Even in the research we did people said that for the most part they came for the Tropenmuseum in general and not for the Bisjpole exhibition (with special exhibitions this is normally the other way around). I think that the lack of success can be attributed to the incomprehensible campaign we made. The impression that people get of this poster when driving by is mainly green messy soup. The illustration is too detailed to get a fast impression. What makes it worse is that the message is too small to read properly. At the end of the exhibition we ran some small advertisements in the Dutch newspapers. We crafted our own more straight forward advertisements. We made it easy to read and comprehend, we added some positive quotes from those newspapers and we added a sense of urgency “Last Chance” (laatste kans) in a banner across the advertisement. We did not research if this advertisements work. But I do know that we made one of the best months ever in attendance.

Another example is the Vodou campaign, depicted below. The campaign image is ok. Pretty straightforward creepy looking fellows with big characters screaming out “VODOU”. But within the Tropenmuseum we had some discussion about using ‘Vodou’ or ‘Voodoo’. The exhibition is about Haitian Vodou, which is spelled V-O-D-O-U. But everybody in the Netherlands is more familiar with ‘Voodoo’ the way they spell it in Hollywood. We did some research about how people would perceive the word ‘Vodou’ vs ‘Voodoo’. What we found out is that people never heard of the word ‘Vodou’ but still associated it with ‘Voodoo’ in a way. So we choose Vodou because it is way it is supposed to be written and because we thought people would still comprehend it. Looking back now, I should have fought more for the ‘Voodoo’ instead of ‘Vodou’. I think it would have sold the exhibition better…or at least the advertisements would have made faster and bigger impression.

As a museum marketeer you have to compromise. But next time I make an advertising campaign I won’t forget…..that ads are there to sell, not to satisfy the curator.