Predecessor Damien Hirst at the Tropenmuseum

The famous artwork ‘for the love of God’, made by Damien Hirst, starts it world tour in Amsterdam at the Rijksmuseum at the 1st of November. This artwork is a skull which is cast from platinum, encrusted with 8,601 diamonds and has its original teeth. An investment group bought the skull a few years ago for an estimated $100 million dollars. The whole Dutch press is all over it. So great PR for the Rijksmuseum. The new director in chief of the Rijksmuseum Wim Pijbes is showing off his new talents. But this skull is actually accompanying the exhibition Hirst has made for the Rijksmuseum. Hirst has chosen a personal selection from the Rijksmuseum’s collection of 17th-century art. So that PR message is a bit lost. But a little secret is that the ‘real’ thing can be found at the Tropenmuseum. But the PR value of this magnificent piece is actually not the same. 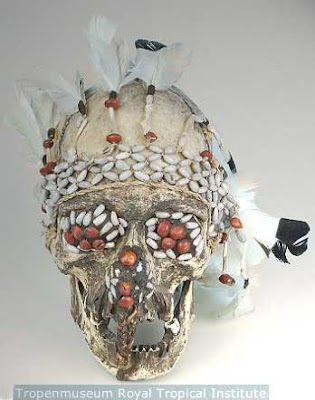 Note on the Tropenmuseum skull: This skull is from New Guinea. It is probably an ancestor because there is no hole in the skull to remove the brains. The line between life and death was not strongly drawn in most Papuan cultures.For example, the dead could still be present as spirits among the living. They had a great influence on a person’s daily existence and it was essential to ensure that the spirits remained well disposed.